For years, embryonic stem (ES) cells have shown great promise in helping to stimulate our body’s own ability to heal, but there are limitations to using these cells. Oftentimes, ES cells are rejected by the body’s immune system because they are not native to the body. There is another type of stem cell, though, that lack these compatibility issues.

Induced pluripotent stem (iPS) cells, which were only discovered in 2007, are derived from the cells of the patient. Given the fact that the cells are already native to the patient’s body, they are much more likely to be accepted by the immune system than foreign ES cells. This gives doctors the opportunity to create individualized therapies that are directly tailored to the needs of the patients.

The ultimate goal of this grant is to help bring the use of treatments which use iPS cells to clinical trial. Upon receiving FDA approvals for these trials, and once they are ready to be produced by biobusinesses, they have the potential to revolutionize personal medicine.

Once approved by the federal government, scientists have the real possibility of using iPS cells on a large scale. Researchers at the University of Minnesota, for example, are testing ways that these cells can positively impact those with macular degeneration (AMD), Epidermolysis Bullosa‎ (EB), spinal cord diseases, and cancer. Also, no matter how advanced and effective medical devices, such as pacemakers, can be to treat various conditions, utilizing iPS cell treatments to replace dead or diseased cells with fully-functioning cells will always be more effective than artificial substitutes.

While the University of Minnesota has the advantage of pre-existing biological manufacturing expertise aligned with stem cell professionals, the University lacks some of the infrastructural needs to aid these scientists in bringing the use of iPS cells from the discovery science and translational research stages to the clinical trial stage. ES cells, which utilize more established technology than iPS cells, are already being used in clinical trial treatments. IPS cells currently lack FDA approval to begin similar clinical trials.

The infrastructural needs that this grant supports include educating cell manufacturers at the Molecular and Cellular Therapeutics facility on how to work with iPS cells, building a clinical team that fulfills institutional compliance standards and screens potential donors, and other services that contribute to current research projects involving the use of iPS cells. 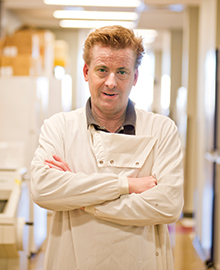 Dr. James Dutton is an Assistant Professor and developmental biologist at the University of Minnesota’s Stem Cell Institute, where he directs the activities of the Cell Reprogramming Core Facility. He is involved in the clinical application of cell reprogramming in order to further spur the evolution of personalized medicine and help it reach and fulfill clinical stages. Dutton earned his PhD in 1992 at the University of Whales in the United Kingdom.